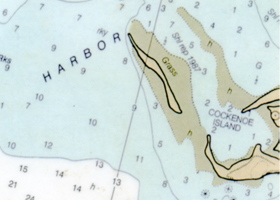 Cockenoe Island is the furthest east, with a long reef extending almost a mile to the east. Cockenoe (pronounced cock-kee-nee) has several spots to anchor. There is an inner harbor, which only has about 3-4 feet of water at low tide. Getting into the inner harbor is impossible at anything less than half tide, due to many shallow spots. Approach from south of the northern sand spit, or around the eastern reef and R “24” / G “1”. The area north of the Island offers gradually increasing depths as you move further to the east. There is about 6-7 feet of water off the eastern end. Many people also anchor to the west of the sand spit, where there is over 7′ of water, and good access to the beach. 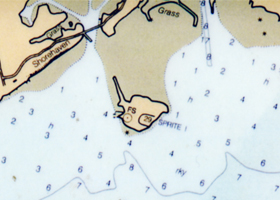 Moving to the West, the next main island, close in to shore, is Sprite Island, owned by a family orientated Yacht Club. There is under 6′ of water in much of their mooring field. The island has picnic facilities. 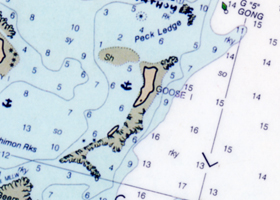 Farther out is one of our favorite anchorage’s, inside the crescent shaped Goose Island. Good holding in the sandy bottom, and well protected. This is far enough out to be significantly cooler in the summer, with a good beach area, and a rock strewn shore to walk around. The small stone building in the center is an abandoned research station. There are rarely any boats anchored here in the summer overnight. Note that the sand spit does extend westward about 200 feet from the northernmost point. 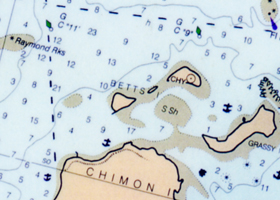 Just west of Chimon is also a popular anchorage, but when there are a lot of motor boats around, you will be exposed to some wake. Between Copps and Chimon is a good anchorage—very secluded, but it’s normally almost 2 hours to sail to, and it’s not suitable if the wind is out of the south or east. Note the lone rock that sits 5′ up out of the water at low tide, but is covered at high. Go in very slowly, using compass bearings. 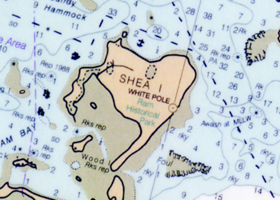 Moving west on the middle passage (you can carry 4′ of water over the reef at low tide), there is Shea Island, which is a good spot to anchor at. Ensigns can get within 30-40 feet of the Island. By following the shoreline of Shea, it is possible to head west towards Sheffield Island, and miss the very busy channel just south of the power plant. Due to the extreme narrowness of the channel south of the power plant, tacking in this area is strongly discouraged by the police, which is why we do not allow any tacking in that area. If you want to sail out to the east in one of the daysailers, hug the shore of Shea. The depths change dramatically when you follow the route we have laid out on the chart, but you will hold at least 5′ even at low tide. Depths will jump from 30′ to 5′ in a matter of 200 feet. 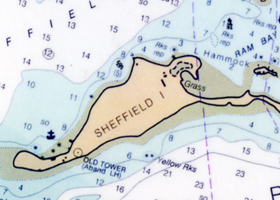 Past Shea is Sheffield Island. There is the remains of the old Prohibition era gambling casino. The casino was on the northeastern end of the island, where there is a landing pier extending out into the water. It is possible to anchor anywhere off Sheffield. However, it is somewhat exposed to a SW breeze, and motorboat wakes heading out the channel. However, the old stone lighthouse is certainly worth a tour, before the next hurricane makes is accessible to divers only! 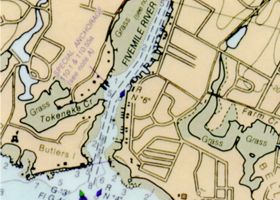 There is also the picturesque Rowayton Harbor, but you must pick up a mooring or dock. Lots of great little restaurants in the area.

West of the Norwalk Islands is one of the prettiest little coves on the Sound, Zieglers Cove. All the surrounding property is owned by the Ziegler family. It’s a wonderful, undeveloped spot. However, there is very little room to anchor close in. Stay away from boats on mooring, since they swing at a different rate. Since there are numerous charted rocks, use compass bearings off the various points on your way in and out, and keep your speed under 2 knots.

Show your love or appreciation with a gift worth giving. Purchase a class, membership or simply give a dollar amount to use at SSC.

ONE WEEK SESSIONS starting June 21 thru August 27. Ages 6-13. Discounts for multiple weeks or multiple children. Two or more children per family gets 10% off second child. Sign up for more than a week, get 10% off for second plus weeks.

Start Your Adventure Here! Our base in Norwalk Connecticut is in the midst of the Norwalk Islands, a six mile long chain of islands formed by the last glaciers. They END_OF_DOCUMENT_TOKEN_TO_BE_REPLACED

Get US Sailing Certified at SSC